Medellin is one of the most notorious cities in Colombia, and yes, it’s where the Medellin Cartel comes from, one of the deadliest drug cartels of all time. Now, although the Medellin strain of marijuana has nothing to do with the city or the cartel, the name still strikes fear in the hearts of many.

That said, as far as the Medellin strain is concerned, there is nothing to fear, especially if you like hybrid strains that provide you with the effects of both indicas and sativas. This heavy-hitting strain is going to make you feel a lot of different sensations, and quickly too.

The Medellin strain is quite powerful, and today we want to discuss exactly what you can expect from it, including its taste, aroma, appearance, effects, growing information, and more.

If these effects sound like something you’re interested in, check out our Medellin 2G Disposable Vape, loaded to the brim with super high quality delta 8 THC. If you’re unsure how vape pens work, here is a nifty resource that explains exactly that. 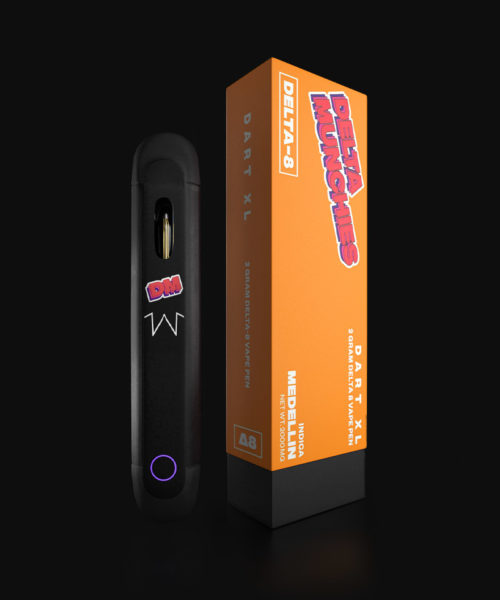 What is the Medellin Strain?

The Medellin is a hybrid that is generally well-balanced between the sativa and indica side of things, although depending on the exact plant and its lineage, it may lean more towards sativa or indica. It is a cross between two other popular strains: Chemdawg and Wedding Cake.

As mentioned above, for all of you crime and murder fans, unfortunately, the Medellin strain has no super interesting backstory tied to cartels, but rather was created by breeders at Lemonnade Cannabis.

Although it might not have a riveting backstory, thanks to its super high potency, heavy hitting effects, and potent flavors, it is one of the most notorious, popular, and sought-after strains out there.

The buds from the Medellin strain are generally fairly elongated, not super round or pebble-shaped like many other strains feature. Some people would say that they look like little spades or shovel heads.

The buds from this strain also tend to be somewhat fluffy and not overly compact. If you touch a Medellin bud, you’ll be able to squeeze it together quite significantly.

As for the colors, here you will see a moderately light green bud combined with a layer of those beautiful orange hairs and a thick coating of those THC-heavy trichomes.

Remember, the Medellin strain has a very high THC level, and a whole lot of that THC is contained in that thick white coating of snowy crystals.

The Medellin strain is a cross between what has to be two of the most popular strains of weed of all time. These two strains are Wedding Cake and Chemdawg, otherwise known as Chemdog.

First, we have the Wedding Cake strain, an indica-dominant strain made by crossing Girl Scout Cookies and Cherry Pie. Wedding Cake has roughly 23% THC and has an earthy, citrusy, and vanilla-like flavor.

We then have Chemdawg, a fairly well-balanced hybrid strain that is slightly sativa dominant, and it is made by crossing various strains, including Thai, Nepalese, Sour Diesel, and OG Kush.

Because the Medellin strain is made by crossing an indica-dominant strain with a sativa-dominant strain, the result is often a well-balanced hybrid, although, depending on the exact plant, may be sativa or indica dominant.

One of the reasons why so many people like the Medellin strain is that it contains a very high amount of THC. It can contain anywhere from 23% to 26% THC, with somewhere around 25% being the normal.

Therefore, you can expect the Medellin strain to be a very heavy hitter, one that floods your brain with THC, and because it is a hybrid, you can expect to feel a wide variety of sensations.

Due to its high potency, it does hit fast and hard when you smoke or vape it. It’s a strain recommended for more seasoned cannabis veterans, as it may be a bit too strong for first-time smokers. As for the CBD content, this is quite negligible, although it may contain up to 0.5% to 1% CBD.

Some of the main terpenes contained in the Medellin strain include caryophyllene, humulene, myrcene, limonene, pinene, linalool, terpinolene, and ocimene. We will discuss further below what this means in terms of flavor and aroma.

Because this is a hybrid strain, you can expect to feel many different sensations and reap many benefits, as it produces both a head high and a body high, with the head high usually hitting first. From your first puff, you are going to feel a sense of mental relaxation, happiness, and euphoria.

Many people also note that it makes them much more social, creative, talkative, and giggly. It’s a big time mood booster and can also be slightly energizing. However, soon after, the indica side of things may take hold. You may feel a good bit of physical relaxation with your body getting heavy.

Chances are that you will feel heavy, relaxed, and slightly sedated, with some people feeling sleepier than others and many also getting the munchies. For this reason, we say that the Medellin strain is a good afternoon or early evening strain.

The Medellin’s strain flavor profile is quite complex, with various flavors, including tea, lemon, citrus, fruit, berries, and vanilla. This strain is very strong and intense, and it’s something that you’ll be able to smell long before you spark your joint.

If you want to grow the Medellin strain, you can do so indoors and outdoors, although it tends to do very well outdoors. These plants are fairly short and wide and can produce some fairly impressive yields given the right conditions.

When grown outdoors, at the end of the 60+ day flowering period, you can expect each plant to produce between 10 and 14 ounces.

If you are looking for strains of weed that are similar to the Medellin strain, options such as Chemdawg, Wedding Cake, Girl Scout Cookies, Sour Diesel, Candyland, Pineapple Express, Mimosa, and Lemon Haze all make for good alternatives.