If you are into trying new kinds of marijuana, whether to vape, smoke, or eat, there are hundreds, if not thousands, of strains for you to choose from. One of the most popular strains of all time is none other than LA Confidential.

Sure, some of you might know the popular action film from the late 1990s that goes by this same name, and yes, the name of this strain is inspired by that same movie, LA Confidential.

Although the movie itself was exciting and thrilling, this strain is more likely to put you to sleep, which might be exactly what you want. Let’s take a closer look and find out everything you need to know about the LA Confidential strain.

If you want to try this strain yourself, try our brand-new limited edition LA Confidential Delta 8 Disposable! 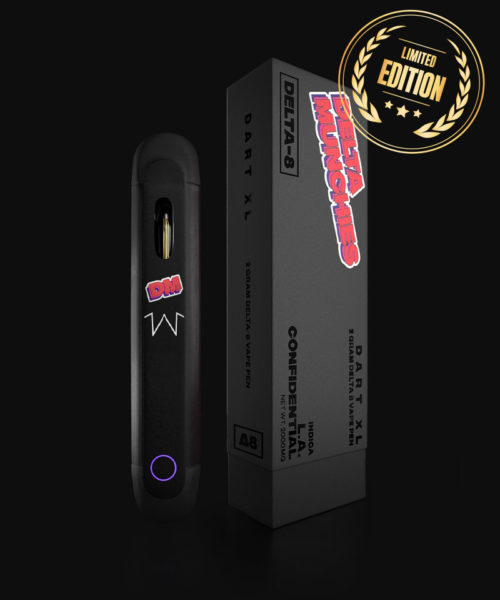 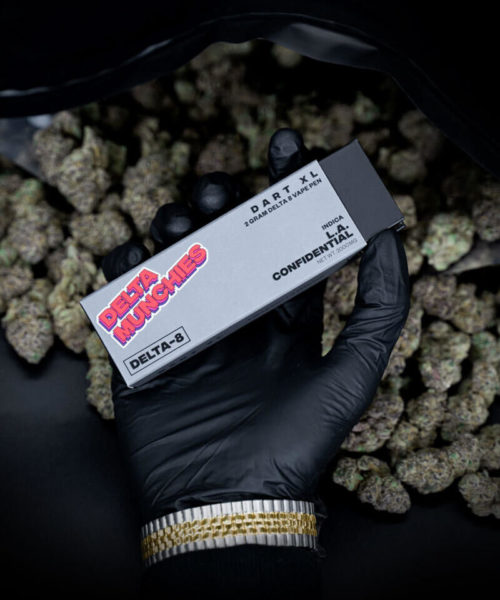 What is the LA Confidential Strain?

LA Confidential is also known as Confidential OG or simply Confidential. This is an extremely popular and well-known indica strain, complete with frosty green buds, purple leaves, and a fairly moderate THC level.

LA Confidential is a cross between two other popular indica strains of marijuana, therefore resulting in a heavy-hitting indica that is going to put you to sleep, but not before it makes you feel relaxed and super hungry.

It has a skunky and earthy flavor, hits fairly quickly, and is a good option to help sleep better, keep stress and anxiety at bay, and reduce minor pains.

In terms of appearance, LA Confidential features huge fat buds, larger than most other strains. These buds generally come in the form of spades or something similar, not nice and round like some others, and the buds are quite fluffy too.

Unlike some other strains that feature rock-solid buds, these buds are fairly fluffy. As for the color, here you will see emerald or lime green buds that have some darker olive green leaves, along with a good bit of orange hairs, a bunch of super purple sugar leaves, and a ton of crystal white trichomes that are loaded with THC.

It’s definitely one of the more beautiful looking strains out there right now.

Afghani is one of the oldest and most well-known indica strains, coming right from the mountains of Afghanistan. This is also some of the most popular weed to make hash out of.

We then have OG LA Alfie, which is a cross between Landrace Afghani weed and another unknown yet powerful indica strain.

The THC content of LA Confidential is fairly moderate, coming in at between 16% and 19% THC, with around 17% being the average.

As for CBD, CBG, and other cannabinoids, LA Confidential does not contain them in any significant amounts.

This is an indica strain that, although it will make you feel tired quite quickly, won’t hit you overly hard. It is ideal for beginners who want a somewhat weaker indica to try out or for more experienced smokers looking for a moderate daytime indica to smoke.

The main terpenes contained in the LA Confidential strain include a-humulene, b-caryophyllene, b-myrcene, b-pinene, and p-cymene. Yes, this all sounds quite technical, but we will tell you exactly what this means in terms of flavor and aroma further below.

LA Confidential is an indica strain, a pure indica, so you can expect the effects to be in-line with most other indicas. What many people like about this strain is that the high gradually builds up during and after you smoke. It doesn’t all hit you at once like a brick from the first puff.

While you smoke LA Confidential, you will slowly notice yourself growing more mellow, relaxed, and sedated. You’re going to feel a strong body high building up from top to bottom, with your muscles feeling relaxed and your head feeling a state of bliss.

Many people also report a warm and tingly sensation throughout the body, particularly in the extremities. LA Confidential is a pretty classic indica in terms of producing a relaxing and sedative body high that makes you feel mellow, calm, at peace.

You’ll definitely get the munchies from this strain too.

Thanks to the variety of terpenes contained in LA Confidential, it has quite a complex flavor profile. Here, you will taste notes of wood, earthiness, pine, and skunk. The flavor and aroma of this strain is very strong and pungent. It’s one of those strains you can easily smell long before you light it up.

LA Confidential has a flowering time of up to 56 days. It is best grown outdoors in hot climates, particularly if you want big yields. This strain also prefers low humidity levels combined with very high amounts of light. When grown outdoors, expect the yield to be up to 16 ounces per plant.