With absolutely massive THC levels and a strong flavor to match, this potent indica will hit you with that one punch knockout shot that will put you square on your behind.

Although not for the faint of heart, if you like pushing things to the next level, then this near 30% THC strain is worth checking out. Let’s find out what the Kosher Kush strain has to offer.

If you want to try the Kosher Kush strain, check out or own Kosher Kush 2G Delta 8 Disposable. 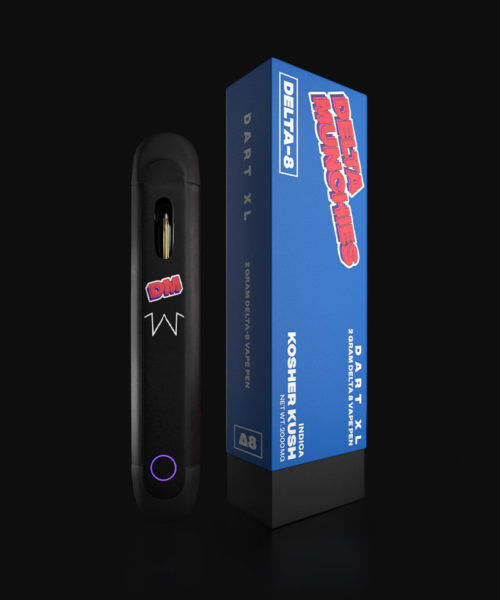 What is the Kosher Kush Strain?

Kosher Kush is often referred to as one of the purest and most potent indica strains out there, complete with an insane THC level of 29% and sometimes even up to 30% or slightly over. This is one of those strains that will have you flying sky high, all the way to the moon and back.

One of the reasons why it is so famous is because it is the first commercially available strain of marijuana to be blessed by a real Jewish Rabbi, hence the peculiar strain name Kosher Kush. Kosher means that it is approved by the Jewish faith, although how accurate this is in terms of the Jewish faith supporting marijuana consumption is questionable at best.

Either way, the origins of the name are clear, and what’s more, this strain has won several awards. The Kosher Kush strain won the award for Best Indica Strain in the High Times Cannabis Cup, both in 2010 and 2011. It also won Best Cannabis Strain in the same cup in 2011.

Kosher Kush may not look like anything overly special at first glance, but looks can be deceiving. Here, you will see a spade-shaped bud that is very elongated. The buds feature a medium density, so not too hard and not too squishy, combined with a very leafy exterior.

Kosher Kush features many different shades of green, ranging from light to dark, combined with a fairly thick layer of those orange hairs and just a little bit of purple sugar leaves mixed in.

The interesting thing about Kosher Kush is that although it is known that it is a 100% pure indica, nobody actually knows where it came from. What the two parent plants of this strain are is not known at this time. It is thought that OG Kush may be one of the parent strains, although this has not been confirmed.

This strain is so popular because it has such a high THC level, usually 29%, although it may occasionally exceed that amount, reaching levels of 30% or higher. This makes it one of the most potent indicas out there, and one of the strongest strains in general. Other than that, Kosher Kush does not contain significant amounts of other cannabinoids.

Due to its huge THC content, it’s not ideal for beginners, as it may induce some feelings of anxiety or paranoia, at least if you are unfamiliar with such a strong high. That said, it makes for a good nighttime weed that will make you forget about the long day behind you and will have you waking up the next morning not knowing how you managed to find your way to your bedroom.

The dominant terpene contained in Kosher Kush is myrcene, along with some caryophyllene and limonene. These three terpenes lead to the complex flavor profile that we will look at further below.

Seeing as Kosher Kush is a pure indica, combined with very high THC levels, you can expect this strain to immediately sedate you right from the first hit. This is a hard-hitting indica strain that is going to make your body and eyes feel super heavy and relaxed.

This strain is going to melt away your troubles and leave you locked into your couch for the rest of the day. It’s also going to make you feel hungry. You’ll be lucky to stay awake for a couple of hours after smoking or vaping Kosher Kush.

Kosher Kush is a great option for better sleep and pain relief.

Kosher Kush is known for being super stinky and potent, one of the top five smelliest strains out there. It features a super pungent odor that has strong earthy notes, followed by undertones of sweetness, pine, and citrus.

This is a strain where the smell will infest an entire space from the second that the container is opened.

People like Kosher Kush as it is very easy to grow and resilient to adverse and changing conditions. It’s resistant to mold, pests, temperatures, and varying humidity levels. That said, if grown outdoors, ideally, the climate should be temperature and dry.

The flowering period is roughly 10 weeks, with outdoor plants producing around 16 ounces a piece. The key takeaway here is that Kosher Kush plants are quite large and require plenty of growing space, particularly in terms of width.

If you are looking for some other potent indica strains, check out ones such as Strawberry Banana, Purple Kush, Chocolate OG, Green Gelato, Ice Wreck, and Skywalker OG.