One of the most frequently asked questions in the stoner community is: Can I fly with weed? With cannabis laws in the United States and around the world constantly changing, the answer to that question is obviously a little bit complicated.

Since flying usually involves crossing state lines, this can make the process of flying with weed a bit of an issue. Cannabis may be federally legal in the United States, but that’s unfortunately not the case in every individual state. The cannabis laws in the United States are made on a state-by-state basis which can potentially spell big trouble for someone who is coming from a state where marijuana is legal and going to a state where marijuana is still legally prohibited, and even worse, prosecuted.

Because of these ever-changing legalities, cannabis users are always on the lookout for loopholes or ways around them while traveling. People who use marijuana on a medical basis need to be able to bring their medicine with them when they travel, and people who use marijuana exclusively for recreational purposes don’t want to be bound by outdated and oftentimes unjust cannabis laws. The airport can be an intimidating place (especially for a stoner), but sometimes it’s the only option.

So, can you fly with weed? Can you fly with edibles? We’re here to answer those questions (and more) so that you’ll never have to worry about wondering how you’re going to transport your bud when you’re traveling.

Disclaimer: This article was written in March 2022 and reflects the United States’ laws that were current at that time. Because cannabis laws in the United States laws are subject to change at any time, please make sure that you are always staying up to date on your federal, state, and local county’s cannabis laws. Additionally, we are NOT encouraging anyone to break the law––we are simply showing people ways to legally and discreetly bring their cannabis products along with them on their travels so that they may have access to those products when they reach their intended destination.

Delta Munchies has got you covered with the best in class HHC. Check ’em out!

Can You Take Weed on a Plane?

On a federal level, marijuana is still legally considered a Schedule I drug, which is defined as a drug that has a high risk of abuse or addiction with little to no medicinal value. On a scientific level we know that’s untrue when it comes to cannabis, but the legality still has yet to catch up. Until the cannabis laws begin to correctly reflect the cannabis science, it’s murky waters (or skies, in this instance) when it comes to taking weed on a plane.

So if you’re traveling between these states, there should very little to worry about (although you should be wary of layovers.) But surprisingly, you may have less to worry about in illegal states than you think. In fact, the TSA has openly stated that they aren’t even searching for drugs like cannabis––and neither are the K9 units you see at the airport. Instead, they’re both searching for dangerous liquids, weapons, bombs, or any other immediate threat to the safety of the passengers and crew. So you can take a sigh of relief! 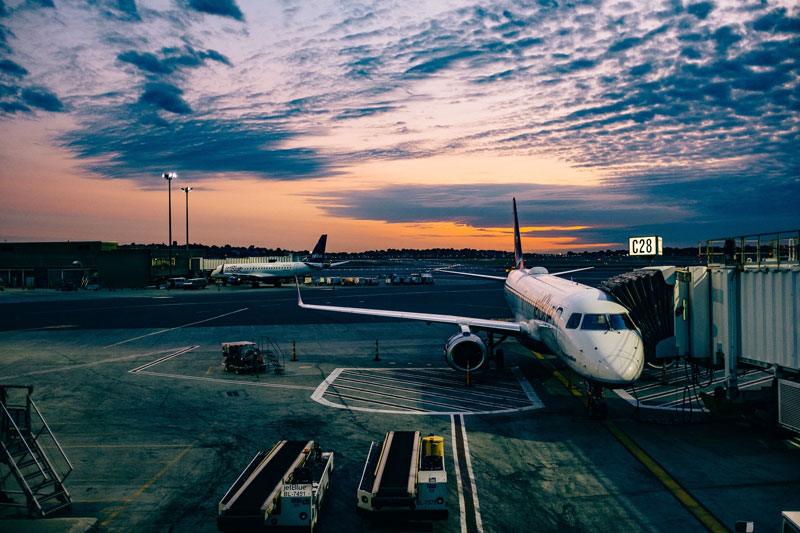 How to Bring Weed on a Plane

There are a couple of ways to bring weed on a plane without causing any trouble or drawing any attention to yourself. Your first instinct may be to put it in your checked luggage, but that’s actually the worst place to put it. The TSA does random baggage checks very frequently, meaning that it’s extremely likely your bag will be rifled through upon being checked. (Many times they will leave some kind of brochure in your bag saying it has been randomly searched.)

Although it may be scary, if you really want to know how to sneak weed on a plane, the best place to keep it is on your person. While television and movies may lead us to believe otherwise, the TSA is truly not very interested in catching people flying with a little bit of weed. They’re there to prevent anything from getting on the plane that has the potential to bring it down.

The x-ray scanners that your bags go through are high-tech, but not as high-tech as you may think. They can pick up a lot of things, but some bud is just going to look like an indistinct mass to them. It wouldn’t be anything they were actively looking for.

This goes for the K9 units or ‘drug dogs’ that you frequently see at airports, too. Most of those dogs aren’t actively looking for drugs, they are ‘bomb dogs’ looking for explosives. Again, while it is still illegal to carry drugs over state lines via airplane, the people protecting the airports have much bigger things to worry about. (Although this is ultimately up to each individual law enforcement officer or TSA agent to decide what they want to do if you were to potentially get caught––most of the time, they’ll probably just dispose of whatever they find, but don’t rely on that. Some may choose to escalate it.)

The fact that the TSA isn’t actively searching for weed helps luck be on your side, but you still want to make sure you’re being discreet about your cannabis. And that includes smell––they don’t call it ‘skunk’ for no reason. You want to make sure that whatever kind of weed you’re bringing isn’t super loud or pungent. Here are a few of our favorite ways to safely and discreetly pack our bud:

(If you’re still worried about bringing weed and still want to be high for the plane ride, that’s the beauty of edibles––eat one on the way to the airport, and by the time you’ve passed TSA and are in the air, you should be flying high in another way, too!) Delta 8 products are federal legal products and can be a better option with more research about their laws and regulations.

Disclaimer: This article was written in March 2022 and reflects the United States’ laws that were current at that time. Because cannabis laws in the United States laws are subject to change at any time, please make sure that you are always staying up to date on your federal, state, and local county’s cannabis laws. Additionally, we are NOT encouraging anyone to break the law––we are simply showing people ways to legally and discreetly bring their cannabis products along with them on their travels so that they may have access to those products when they reach their intended destination.