Jane Austen once said that good apple pies are a considerable part of our day-to-day happiness. But we also think hits of Apple Gelato could be a tremendous alternative nowadays with our chaotic lifestyle.

Apple Gelato is a delicious hybrid strain with energetic and happy vibes that feels like a fruit treat during the harvest season. But don’t worry, you won’t need to wait for the apples to bloom to try this energizing treat.

Want an apple-flavored way to get high? Check out our brand new Apple Gelato HHC Disposable! 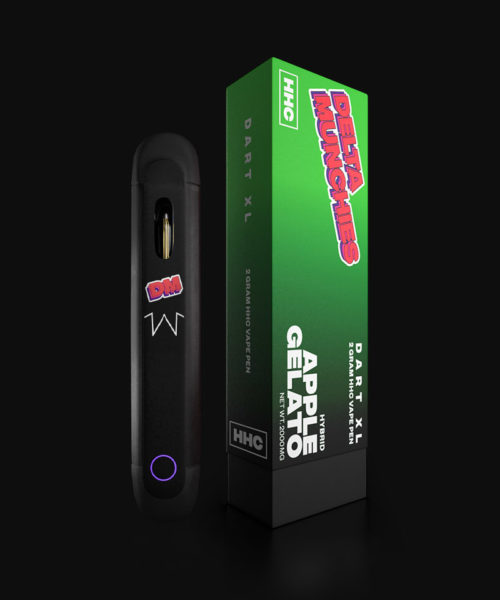 What is Apple Gelato Strain

Apple Gelato is a powerful hybrid strain that comes from two iconic crosses, Sour Apple and Gelato #33. This strain is not only delicious but also one of the few relaxing yet-energized sativa-dominant hybrids around.

With creamy apple and menthol notes, this strain is quite different from most, paired with a well-balanced high. It mixes the best of a ripe sour apple with that creamy, sugary, and citrus flavor that is perfect for a midday treat.

The flavor profile on this one is perfect if you just want something sweet yet different from your average candy strain. And thanks to its lineage, you’ll remember this apple for being strong, with some varieties having between 22 and 35% of THC levels.

Let’s go with the looks. This strain has a peculiar look, with fat and dense buds all around. Some breeders even call them “popcorn-shaped,” thanks to how the nugs open up.

Color-wise, these buds are mostly olive green with some mint or pale green colors around.

Unlike other strains, the Apple Gelato has small and thin orange hairs that barely cover up the bud. Besides, it has small golden white crystals that cover the bud with trichomes.

At a glance, the pale and dark green, the popcorn-shaped nugs, and the yellow and orange notes give this nug a “sour” look. So even though it is an apple gelato, it can certainly also be great eye candy for nug cannaseurs.

Some people say the best apple orchards tell a story. And this Apple strain also has a lot to tell. First, Apple Gelato comes from the iconic Gelato family, a hybrid and cross strain that has strong energizing effects and iconic creamy and minty undertones.

On the other side of the family, you have the delicious Sour Apple, sometimes called Sour Apple Diesel. This hybrid falls more into the indica side but is still pretty potent with tasty sour apple aromatics and flavor. And fun fact, it is mostly used in medicinal marijuana to relieve symptoms associated with pain or even stress relief.

Apple Gelato, the offspring of both strains, inherited the best of both worlds. While still sour and fruity with the apple as the show’s main star, the Gelato kicks in with creamy, sugary, and minty notes.

This strain is a well-balanced hybrid with strong, energetic feelings, yet very potent to alleviate certain ailments.

Here comes the fun part, the THC content. As we mentioned above, Apple Gelato is known for being strong, and its high cannabinoid content (no pun intended) confirms this. With some varieties going from 22 and up to 35% of THC levels with no CBD, this is one of those flowers you’ll want to pass around.

If delta 9 THC is not available in your state, or you wish to try something similar but federally legal, we recommend HHC. Hexahydrocannabinol is a fairly new cannabinoid that is legal at a federal level, thanks to the 2018 Farm Bill.

Regulation on this cannabinoid is fairly new and a little more relaxed than CBD and D8 THC, just make sure to check the status in your state.

HHC is an incredible way to try a wider arrange of flowers by consuming enriched distillate or products like gummies, with strain-specific terpenes. This cannabinoid is fully natural, more potent than delta 8 THC, and about 80% the potency of delta 9 THC, so perfect for the casual consumer that wants a punch.

Now let’s talk about terpenes. As with most fruity strains, myrcene is the top terpene in this strain. This compound gives strong earthy, fruit-like, and even hoppy notes to the strains while also being pretty good for pain relief.

The two other biggest terpenes in this bud are linalool and terpinolene. The first one is responsible for this strain’s strong relaxing effects, with spicy and flower-like undertones.

Terpinolene is a rather rare terpene to be found in strains. It gives this strain its iconic floral and herbally aftertaste, but mostly, the citrus and minty part of its Gelato heritage.

As a fun fact, this terpene gives the “freshness” feeling after a smoke that some strains from that side of the family, including the famous Mint Scout Cookies strain.

You’ll want to have a taste of an apple dessert strain after this. The Apple Gelato high is insane, with strong relaxing waves and calm like no other. And as a hybrid strain, you’ll start with a soothing of your mind and body that slowly starts to energize and revitalize your body.

Some people feel incredibly happy, giggly, and even focused with this sativa-dominant hybrid strain, especially with the relaxing body high that will still keep you locked to your seat.

Thanks to its strong sedative potential, energy boost, and euphoric feeling, users of medicinal marijuana usually opt for Apple Gelato to treat symptoms associated with conditions like chronic pain and anxiety.

This strain is a must-try for all the sweet and dessert-lovers out there. While the sour apple is the show’s star, you’ll notice how each puff transforms into a creamy-sweet experience.

And thanks to its lineage, this strain has subtle citrusy and minty undertones that just give it the perfect finish. Some people have reported that it has fruity flavors that are just mouthwatering.

In the aromatics section, this strain replicates most of its flavor profile. The predominant scents are apple, citrus, and creamy notes, with a few sour and sweet undertones. Nevertheless, this bud is pretty well-balanced and is not overpowering, nor in taste or smell.

So to sum it up, imagine an ice-cold sour apple, mint, and citrus ice cream right from your favorite orchard to your table. Now turn that into some icy cold bong hits, and you’ll have the best energizing candy dessert you’ll ever know.

In general, Apple Gelato is not a hard-to-grow strain. It can be grown both indoors and outdoors, and while it can be a little harder than your beginner’s seed, it is not something impossible.

This strain grows anywhere from 30 up to 60 inches in height. When grown indoors, expect it to flower between the 55 and 62-day mark, and you can start the harvesting at the 60-day mark.

The indoor yield is somewhat small, with a maximum of 2 ounces of nug per square foot. When grown outdoors, expect anywhere between 10 and 15 ounces of pure product or about 400g of raw flower per plant.

For something similar to this hybrid strain, we recommend either of their parents, depending on the potency, flavor, or profile you want. If you liked the apple aromatics and flavor, Sour Apple is your go-to as an indica-dominant hybrid strain.

Want something a little fresher? The Gelato#33 is your new go-to, with strong energetic effects and harder minty notes than Apple Gelato itself. This strain might be a little less relaxing and more on the sweet side than the apple offspring, so better save it for a day you want to be extra productive.

If you want something like Apple Gelato’s effects but with a different flavor profile, the Green Line OG has strong lime, citrus, and herbal notes while still being a strong uplifting hybrid. However, this one has skunk-like undertones that might put off some people, so just a heads-up, as it is a different world of flavors to explore.